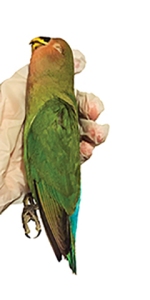 Brightly painted jagged shapes on wooden panels of various sizes hung at random intervals and heights on the three walls of the gallery.  Some monotone with little detail other than the shape itself, some with multiple colors suggesting depth or texture.  One might initially say, “Oh feathers!” or even, “Oh leaves!” as identifiers.  In the center towards the rear of the space a single image placed on a pedestal at waist height to be viewed from above—a seemingly dead bird held by a latex-gloved hand.  Insight assumes that the shapes on the walls are definitely feathers.

The bird in the photograph, titled Second Domestication, is a rosy-faced lovebird “killed on impact by the invisible barrier.”  This victim of the evil magic that is the man-made window was part of a feral population of the species that spawned from domesticated escapees in the 1980s and made Phoenix its home.  Artist Lauren Strohaker studied the factors that allowed the species to flourish in the valley, mostly due to the artificial paradise created similarly to their native home in Southwestern Africa.

Strohacker defines the foundation of her artistic explorations as her realization that contemporary human interactions with animals are for the most part manufactured.  Suburban life produces artificial interactions in media or regulated experiences with living creatures.  As a Phoenician, she could not help but notice the development of land destabilizing the natural world in the name of human comfort and progress.

Using a spectrophotometer, Strohaker converted the hues of the rosy-faced lovebird feathers to interior house paint colors, which were applied to the cut shapes resembling the feathers themselves.  The final product is her take on reimagined domestic décor, a longer-lasting, and easier to control, rendition of the exotic pets themselves.  The work makes broad statements about the treatment of wild animals as commercial products, and the unforeseen effects on the animals when they are introduced to new surroundings and human encroachment.  Strohaker’s work also touches on the suburban need to fill homes with luxurious treasures from the far reaches, capitalized on by chain stores such as Target or Cost-Plus offering mass-produced exotic merchandise.

The body of work is strong in relation to the concept, although some of the cutout shapes are a bit rough and could use some finish.  If they are meant to resemble high end massed produced decorative works then a fine attention to detail would increase their sophistication in the suggested showroom.  Round-sanded edges and a high-gloss resin finish would make these pieces a hot item and cause a bourgeois wrestling match at Pier 1 Imports on Black Friday.  A few of the green monochrome shapes are very similar hues and they are hung in a row, which made them seem more like leaves than feathers.  More detail in these works along with separating them in the installation would have made them stand out for visual merchandising. The artist’s social statements are more important than the actual sales of the object in the commercial capacity, and they are bold if nothing else. 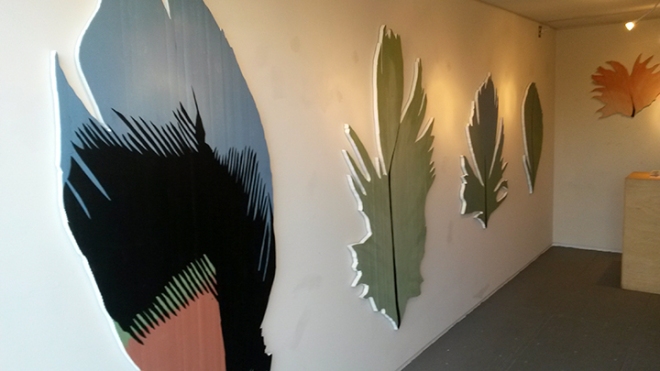