Anyone with knowledge of Phoenix’s art history may look at Josh Louchheim’s work and call him a Philip C Curtis imitator, and they might mean this negatively.  But, Louchheim is not an imitator, he was deeply influenced by the man he knew personally as a family friend, a man who founded the Phoenix Art Museum and has an entire room there devoted to his work.  Josh admired Philip as a young boy and was drawn to his awkward sense of perspective and Surrealist southwestern landscapes, with elongated figures in strange but familiar spaces.  Louchheim has continued the legacy of Curtis, and in many ways modernized it.

Because this was the artist’s first major solo exhibition, it was fitting that some of his older paintings were included, which proved as examples of his growth and the development of his style from one of imitation to a personal voice.  We see direct influence in style and subject matter in paintings such as “Old Timer and a Penny-Farthing”, in which Louchheim’s stretched Victorian figure rides an early 20th century bicycle through a desert wilderness.  He expresses the oddness of the desert city of Phoenix with paintings such as “Desert Oasis II” with a single swimming pool set in a scant desert scene–a modern oasis in the tortuous, primitive climate. 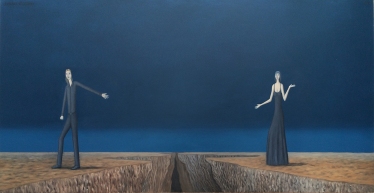 More recently, Louchheim has developed his style into a modern voice of a young man living in a world filled with angst and uncertainty.  He employs more vintage Surrealist techniques and oddities with a much darker palette, seen in paintings such as “Primordial Woman” and “The Great Separation.”  He adds a post-apocalyptic feel to the work that intensifies the anxiety of the figures, and the outlook he expresses about the current state of humanity.  Not without irony, the exhibition was titled “From the Outside Looking In.”  Not a truer statement could be made about this show.  Moving through the space felt like watching the artist grow, as many do, from an apprentice to a sole craftsman, and we look forward to his continued evolution. 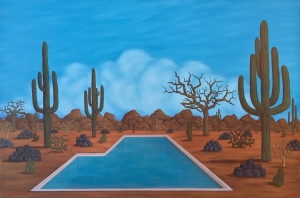 **All images courtesy of the artist. 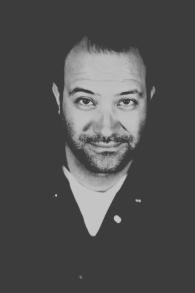